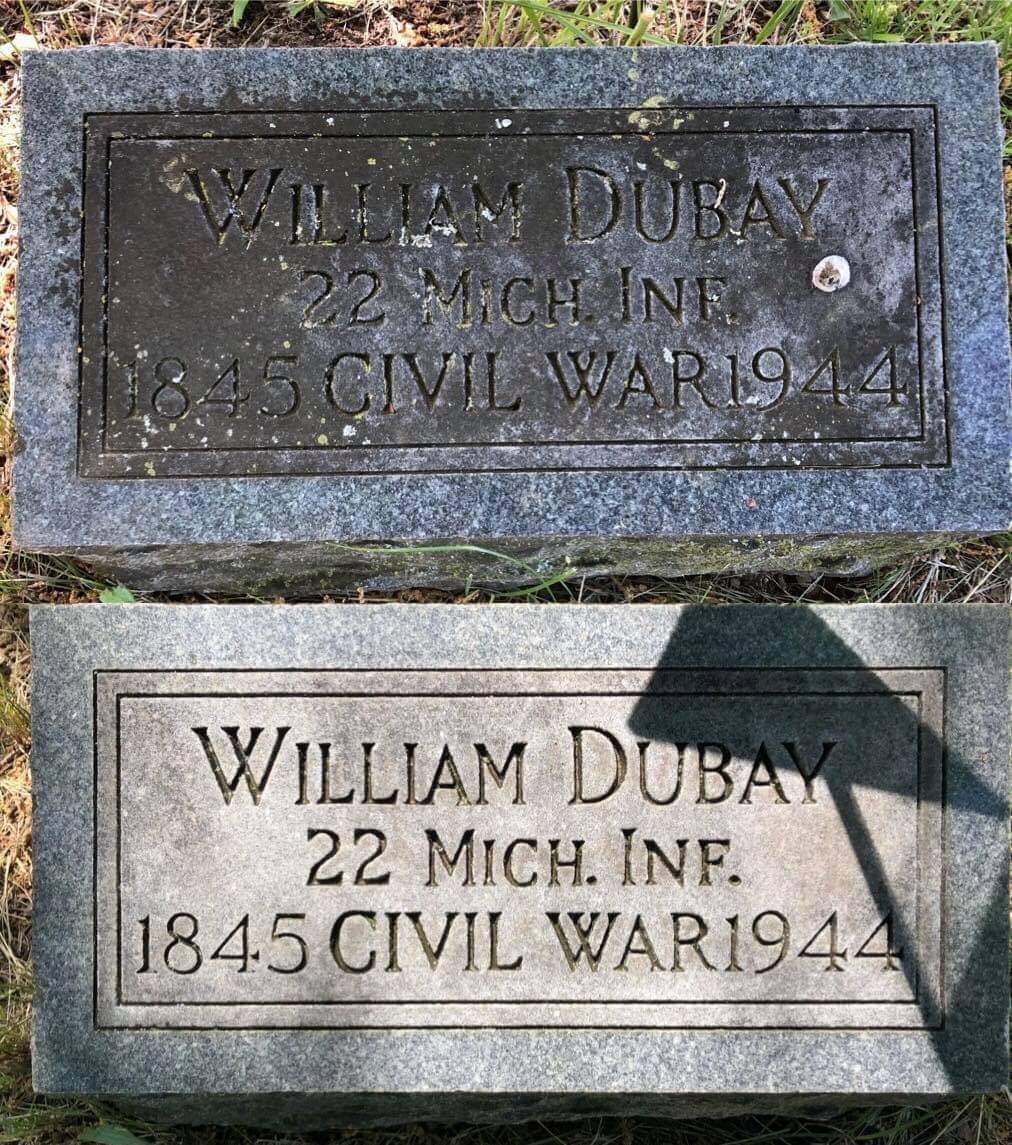 Three Civil War veterans in two New Baltimore cemeteries are expected to receive headstones to mark their graves, due to the dedication of Amy Shirkey-Withrow, a member of the New Baltimore Historical Society.

“It makes me very sad to see someone who was in the military being undercover,” Shirkey-Withrow said.

Shirkey-Withrow assisted with the Company’s gravestone cleanup at Oakwood Cemetery. She also volunteers for Find a Grave, an online list of information on burials and cemeteries largely run by contributors. She learned that Civil War veterans Nelson Carpenter and David Blay did not have gravestones and undertook an extensive search process to obtain markers for them.

She sent out the nominations for Blay and Carpenter on May 21.

Through his research, Shirkey-Withrow learned that a third local Civil War veteran needed a gravestone. Robert Morton is buried in St. Mary’s Cemetery. Obtaining this gravestone required cooperation from the church and the Memorial Products Department of the Veterans Department’s National Cemetery Administration, Shirkey-Withrow said. The request for Morton’s gravestone was sent out on June 7.

Shirkey-Withrow said she was recently given the green light for Blay and Carpenter’s headstones, which arrived and, as of July 12, were in the New Baltimore Department of Public Service awaiting installation. Shirkey-Withrow received an email on June 29 stating that Morton’s headstone had been ordered, and she expects it to arrive in four or six weeks.

The National Cemetery Administration’s Memorial Products Services Department will provide the headstones free of charge, Shirkey-Withrow said. She also stated that the New Baltimore DPS has donated the facility to Oakwood Cemetery at no cost, and that Kerry Shuttleworth will be making the facility at St. Mary’s Cemetery as a donation. Dawn Wolschleger, director of the New Baltimore DPS office, said the department will donate the installation of the two headstones at Oakwood Cemetery. St Mary’s Queen of Creation Catholic Church Cemetery Director Rita Mayer said Shuttleworth donated the foundation work for Morton’s Stone.

Shirkey-Withrow said the dates for the installation of the tombstones had not been selected, but she hopes they can be installed in July and wants to hold a groundbreaking ceremony.

Shirkey-Withrow’s research indicates that Carpenter was born December 15, 1841 and died March 31, 1929. He first enlisted in the military in 1861 and was eventually promoted to corporal. Blay was one of the early settlers in Macomb County, a Mason who fought in the Civil War with Company C, 5th Michigan Infantry. He was wounded in combat. In 1881, he and August Maliskey built the Grand Pacific House for Frederick and Emma Losh. He died in 1927 at the age of 94.

Shirkey-Withrow’s research shows that Morton was born in May 1832 and died on January 30, 1922. He first enlisted in the military in 1861, then re-enlisted and was eventually promoted to corporal. He enlisted for the first time on August 13, 1861 in Company A, 9th Michigan Infantry, and was wounded in action in 1862.

The non-profit New Baltimore Historical Society was founded in 1976. The mission of the society is to preserve the historical aspects of the Anchor Bay community for the future, to maintain the Grand Pacific House as a museum with constantly changing exhibits and artifacts; and provide research and historical programs. in the community.

The Grand Pacific House is located at 51065 Washington St. Society Vice President Vince Nestico said after the Halloween events of October 2020, the museum was closed to the public until July 10. With the help of enthusiastic new members and volunteers, the museum had new exhibits ready when it reopened on July 10.

“We had a lot of work to do, to prepare. Mainly cleaning, rearranging some screens, things like that, ”Nestico said.

“One thing our member Amy (Shirkey-Withrow) has put on is a veterans exhibit. We took out many military artefacts, including civil war documents, ”Nestico said.

The exhibit in honor of military personnel features artifacts such as uniforms, medals, meal kits and more from the Civil War, WWI, WWII, and the Korean War .

“Amy has also put together a collection of photos and biographies of all of the New Baltimore soldiers who have been killed in action,” Nestico said.

Civil War artifacts include a sword, discharge papers, and a certificate of promotion. A clearance certificate is for William Dubay, whose gravestone at Oakwood Cemetery was recently cleaned. Nestico said Dubay was a prisoner of war but was able to return home and lived almost to 100 years old. Dubay was born on April 2, 1844 and died in March 1944.

The museum will be open from noon to 2 p.m. on Saturday, but may close and reopen for special Halloween events in October. Nestico predicted that the museum would generally remain open on Saturdays until around Christmas. The entrance fee to the museum is a donation.

“We will once again be holding our Christmas Open House for the first time since before COVID,” Nestico said, adding that a second potential Christmas-related event is also under discussion.

Nicole Tuttle is a freelance journalist for MediaNews Group.