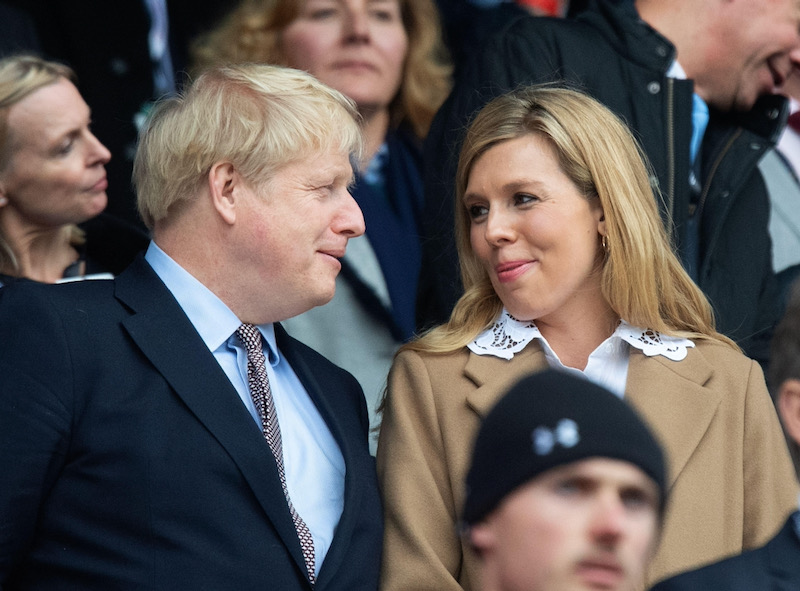 Downing Street declined to comment because Johnson has always operated on the principle that his personal life should be kept private.

The total number of guests was 30, the maximum allowed under Covid restrictions, and the wedding took place in the early afternoon. The bride wore a flowing white dress without a veil.

They were married by Father Daniel Humphreys, the priest who baptized their son Wilfred in September of last year.

It was the first time that a Prime Minister had married in office since Robert Banks Jenkinson in 1822.

Johnson is divorced twice. He and his second wife, Marina Wheeler, had been married for 27 years and divorced last year. They had four children together. Johnson also has a daughter with Helen McIntyre, an art consultant. He was married to Allegra Mostyn-Owen from 1987 to 1993 and that marriage was called off.

Many MPs and others praised the couple on Twitter.

However, some reactions within the Catholic Church have been more subdued.

Father Mark Drew, Deputy Priest in Liverpool, mentionned: “Can someone explain to me how ‘Boris’ Johnson, who left the Catholic Church at Eaton and is twice divorced, can get married at Westminster Cathedral, when I have to tell practicing Catholics to good faith who want a second marriage in the Church that this is not possible?

Another tweeter wrote: “My friend, a practitioner #Catholic, married a divorced man and had to get married in a registry office. She still goes to mass but is refused the sacraments. So how the hell does a serial, multiple divorced adulterer manage to have a locked marriage in a Catholic cathedral? #boriswedding. “

Fiction writer Amanda Egan tweeted: “I do not understand. He got married in a Catholic cathedral after 2 divorces. In order for my divorced husband to marry me in a C of E church, we had to attend counseling sessions at the parsonage and he practically had to be exorcised!

One of the most complete explanations was given by biographer and papal commentator Austen Ivereigh, who spoke on BBC Radio 4’s Sunday.

He said: “Many will wonder: how is it that the Catholic Church, famous for its vigorous commitment to the permanence of marriage, witnesses the marriage of a twice divorced prime minister who is publicly known for opposite? What kind of message does that send? “

Catholics have a right to the sacraments, and if they meet the requirements of the law and adhere to it properly, no one can prevent them from exercising those rights, he added.

To marry sacramentally, both partners must be baptized Christians (in this case both are baptized Catholics) and at least one must be Catholic. Carrie is RC, as she announced on Twitter in 2016. Boris is a confirmed Anglican.

Ivereign said: “They should also be ‘free to marry’, ie not already married, marry a person of the opposite sex, etc. Boris’ two previous marriages were (probably) lacking in canonical form, that is, they are not recognized in Catholic law. So he (probably) didn’t need a cancellation.

“When the canonical form of marriage has not been observed and the marriage has not subsequently been validated in the Church, a simple administrative process is used to declare such marriages invalid in Church law.

“Another requirement is that the partners involved receive instruction, to ensure that they fully understand what they are committing to and what the Church teaches about marriage (indissoluble, etc.). Carrie and Boris received instructions for several months.

“The priest who educated them, the administrator (head) of Westminster Cathedral, Father Daniel Humpreys, also baptized their son Wilfred in December, also in the Lady Chapel where they were married yesterday.

A statement from the cathedral says that both are parishioners, so they are getting married in their parish church and that “all necessary steps have been taken, both in church and in civil law, and all formalities completed prior to marriage. “.

Ivereigh said, “So whatever anyone thinks of their decision to marry sacramentally, and of the Church’s testimony to that marriage, they were exercising their rights, and the Church did everything to make sure that he was. solemnly and correctly concluded.

He concluded: “I don’t think Boris will become Catholic as Prime Minister – there are too many reasons, political and constitutional, that make this impossible. But let’s hope that he is on a path of faith and wish the happy couple all the joy in their vocation of marriage.

Publisher sows seeds of truth and God sees the harvest

Why are American Catholics obsessed with the politics of communion? (Hint: because…